What sparked the Occupy Wall Street protests that have awakened Americans from their slumber? Perhaps it was Dylan Ratigan’s rant on MSNBC where he chastised both U.S. political parties for their ineptitude and corruption.

Based in New York City, Daniel Fink is a Doctor of Naturopathic Medicine who specializes in trigger point therapy and electroacupuncture.

Carolyn Rose Goyda was the original producer and writer for the Veritas radio show and also worked as contributing news-hound and writer for OutThereTV. In 1986, she was part of the US-USSR Soviet American Women Political Cultural Exchange who was present when the Chernobyl disaster happened. 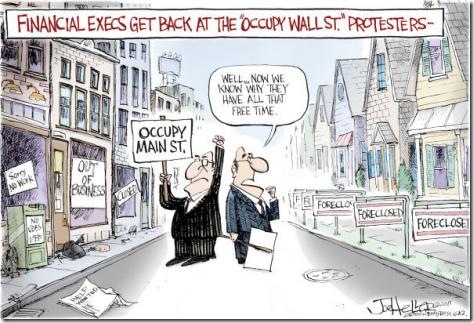 References
OWS VICTORY: The people have prevailed, gear up for global day of action
Posted Oct. 14, 2011, 8:51 a.m. EST by OccupyWallSt
People power triumphs over Wall Street’s bid to end the protests; mayor bloomberg and Brookfield Inc. back down on eviction; world prepares for day of action Saturday October 15 in 950+ cities in 82 countries.