Where should we invest our money? Wayne Jett shares his expert views

Given the scary news headlines that are commonplace, should you put your money in banks, gold, or stocks? Our resident economist, Wayne Jett, offers his advice. 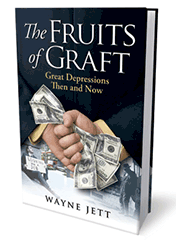 Wayne Jett is a registered investment adviser who serves as managing principal for Classical Capital, LLC that is based in San Marino, California. A staunch proponent of monetary and tax reform, Jett recently completed and released his newest book called “The Fruits of Graft: Great Depressions Then and Now” that’s available from his website and online stores like Amazon. He is also the author of an earlier book called “A General Theory of Acquisitivity” that combines free market economics with theoretical, moral, and ethical underpinnings.

Click here to listen to an excerpt of Jett’s last appearance on the radio show on Apr. 26.

Deep Capture Blog
The Deep Capture website was created to bypass the “captured” institutions that mediate our nation’s discourse. It was initially funded by Patrick Byrne, CEO of Overstock.com, but it is not part of Overstock. It functions as a separate, limited liability media company, whose co-owners and managers are Evren Karpak and Mark Mitchell.

Glass–Steagall Act (repealed 1999)
From Wikipedia, the free encyclopedia
The Banking Act of 1933 (Pub.L. 73-66, 48 Stat. 162, enacted June 16, 1933) was a law that established the Federal Deposit Insurance Corporation in the United States and imposed banking reforms, several of which were intended to control speculation.

One Response to Where should we invest our money? Wayne Jett shares his expert views