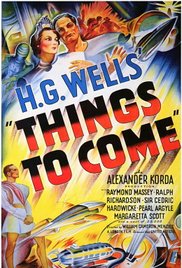 During the depths of the Great Depression in 1933, H. G. Wells wrote his science fiction novel called the “The Shape of Things to Come” that speculated on future events until the year 2106. His novel echoes his long-held view of a one world, socialist state that would rise up out of the ashes of endless war to save humanity. Three years later, London Film Productions would adapt Wells’ novel into a movie called “Things to Come.” As an eerie coincidence, Wells’ prediction of the start of a Second World War in 1940 was off by only a few months.